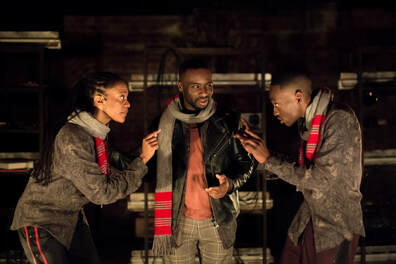 "Munashe Chirisa’s physical movement and humour created a perfect balance to the serious tone of the play"
If you had unlimited magical powers, how would you use them? Would you save the world and everyone in it, and then rest your laureled head on a white sandy beach? Forget it. The myth of Doctor Faustus is a reminder that our wish list is likely to be far more mundane, for example, conjuring up a plate of grapes in the dead of winter to impress somebody important.

What was not mundane, however, was Tangle Theatre Company’s bold production of Dr Faustus at the Arcola Theatre. Tangle Theatre is South West England’s African-Caribbean theatre company, and their work includes aspects of Southern African township and Western theatre traditions. In this production, they combined haunting music and sound with a rich set and outstanding performances to bring the ancient story to life.
Read More 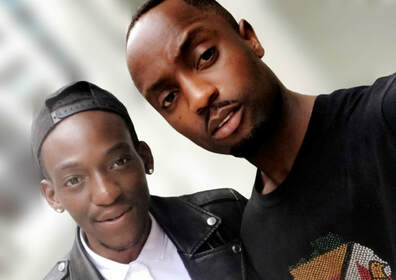 ZIMBABWEAN media brand, MadeInZwe has released a charity single “MadeInZWE” which features over 40 Zimbabwean artists across the world.
Funds from the track released last Friday, will go towards procuring sanitary wear for vulnerable girls throughout the country.
This was revealed by MadeInZwe co-producer, Kuda Ruzane who added that the song was a tribute to Zimbabwe.

“The charity single is a beautiful ode to Zimbabwe in partnership with Creating Better Futures to provide sustainable sanitary aid for young, orphaned and vulnerable girls in Zimbabwe.
Read more 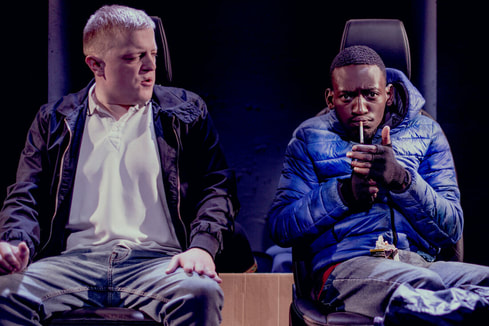 A road tunnel through the Alps, stretching underneath Mont Blanc: Tel (Shaun Mason) is ploughing home to London in a borrowed Merc, strung out and sleepless and having been to see his other girl in Monte Carlo. The Arcola Theatre premiere of Stop and Search finds this white van man incarnate returning to his trouble and strife with a bizarre cargo of beaver hats in the back.

The opening scene of Irish-Nigerian playwright and poet Gabriel Gbadamosi's latest play finds two men in the front of Tel's car as the explosive loudmouth drives dangerously toward the Channel in the rain. His companion is a hitchhiker, Akim (Munashe Chirisa), who has the look and language of an African migrant and is heading for the crossing with a passport that doesn't belong to him. Their pairing provokes a spectacular clash of opposites in this first of the play's three parts. Mason, as Tel, pitches at full volume and is suspicious of and abusive towards his passenger, but a bond forms between the two men – an affection, one soon realises, between outcasts.
Akim is paying his way across Europe with gold teeth and possesses a lovely gentleness in the face of Tel's quivering rage; as played by the Zimbabwe-born Chirisa (pictured right), he's got the philosophical attitude of a mystic wanderer, complete with stories of loss. And so it is that the tables very quickly are turned: soon it is Tel who is out  of place.
Read more 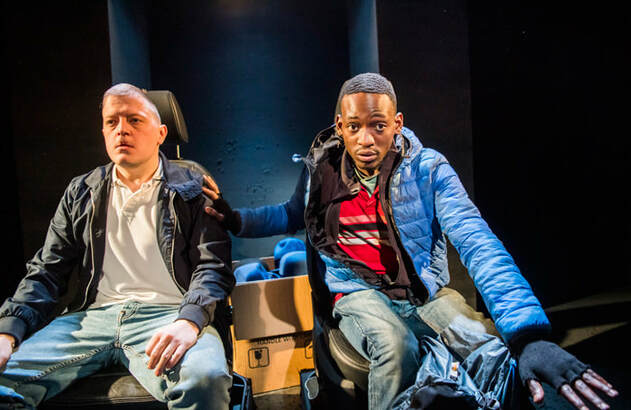 ​Stop and Search at Arcola Theatre. Photo: Tristram Kenton.
Review: Stop and Search at Arcola Theatre
"Chirisa as Akim is the strongest of the lot, a beautiful actor. At the only point he breaks down in the car with Tel, he shrugs a little, then again, smaller and fainter, as he keeps talking and crying – his silence, too, is something you could take in forever "      FREY KWA HAWKING
Stop and Search is anything but obvious. Not just because its scope reveals itself to be much wider than the subject of the racist policy of its title, but because of its slightly muddy, convoluted throughline. It’s more complicated than it needs to be, because the barest moments of this story work – they hurt, as they should do.
​
In the first of Stop and Search’s three scenes, a white driver picks up a refugee and takes him through the Mont Blanc Tunnel; Eleanor Bull’s quietly eloquent set design of two car seats and a litre Coke bottle of piss against a grey gravel floor and a grey wall with three grey alcoves is strengthened by Richard Williamson’s equally effective lighting. Three fluorescent strips above the alcoves and further blinking lighting above manage the shift from oppressive tunnel into daylight effortlessly, and it helps to lift up this, the strongest scene of the play’s three.
Read more

Casting announced for world premiere of Stop and Search at the Arcola Theatre
Tuesday, 27 November, 2018
Sophie Thomas
The full cast for the world premiere of Stop and Search has been announced, which will be performed at the Arcola Theatre.
In a tense political climate, Stop and Search explores the relationship between identities and the way people police each other. The story concerns a driver picking up a young man, who is in the middle of crossing Europe. When police officers are investigating a surveillance case at the same time, the conversations around police and identity escalate.
The cast for Stop and Search includes Munashe Chirisa as Akim, with previous theatre credits including Doctor Faustus at Duke of York’s Theatre. The rest of the cast is made up of Tyler Luke Cunningham (Lee), David Kirkbride (Tone), Shaun Mason (Tel) and Jessye Romeo (Bev).
Read more 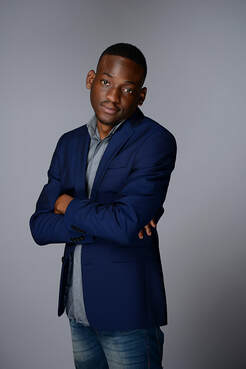 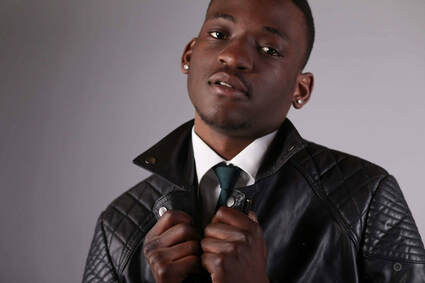 Who rules the Zimbabwean social media streets? Tribe of Influencers, the local oreganisers of the Zim Social Media Awards announced the winners for 2018. Nominations and voting were done online with over 5 000 social media users participating.
The winners with the most awards were comedians Munashe Chirisa and Madam Boss. Madam Boss, real name Tyra Chikocho won two awards while Chirisa walked away with three awards. The awards were held online with no ceremony and prize winners will have to redeem their awards.
Check out the full winners list below:
Read more 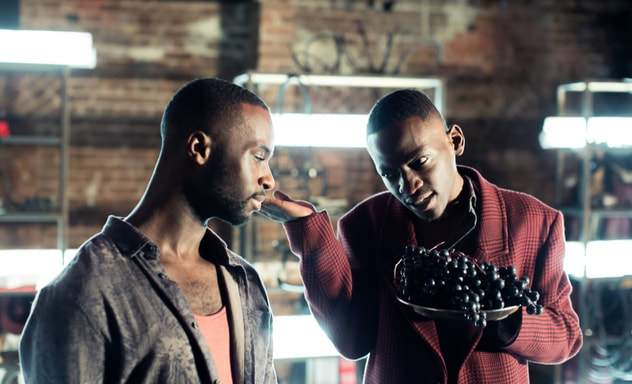 The Emperor In Dr fuastus. With Joshua Liburd. Phot cred : Paul Blakemore
​Review: Doctor Faustus at The Bike Shed Theatre
"Munashe Chirisa’s humour and physicality light up every scene he’s in; by the end, the audience start laughing pre-emptively whenever he sidles onto the stage".               EMILY HOLYOAKE

It’s the opening night of Tangle Theatre’s Doctor Faustus, and I’m about to have a really Faustian experience. I go in presuming intelligence, and come out realising my complete ignorance.

​Is this a Faustian experience? I’m gonna Google it to check. Because I don’t really know Doctor Faustus, but I just sort of assume that since I’ve always been a Shakespeare brat and that one time I did Schiller, there can be no verse play that would pose a particular challenge to me. It takes five minutes of discussion with my sister after the show for her to discover that I didn’t even grasp the basics. I make a joke about how silly it is when Faustus conjures a bowl of grapes for a duke. She calmly points out this is to a) show that Faustus is petty enough to need to prove himself to important people, despite having literal powers of hell at his command, and b) show that Faustus is so mediocre he doesn’t actually know what to do with his literal hell powers. It is not just a joke about grapes.
Read more 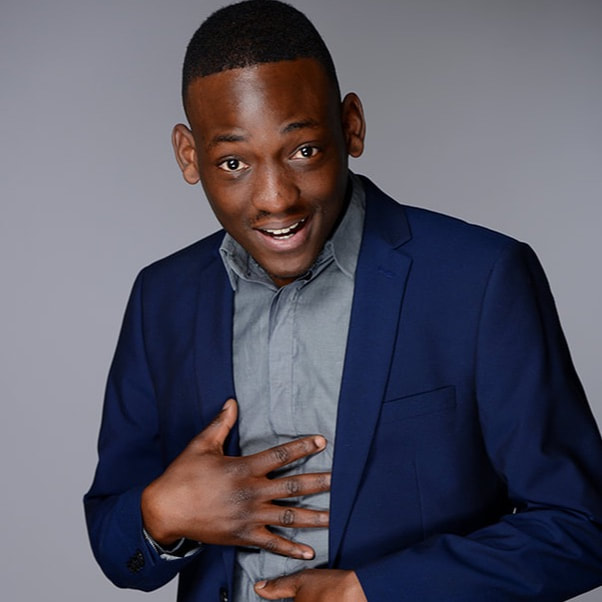 FEATURES
ZIMBABWEAN DIASPORA COMICS THAT ARE LEADING THE PACK
#Zimbabwe
1687 Views
0
01/31/2018 15:43
by Kirkpatrick Chidamba
There is a new age of comedians rising. This trio that does not have direct contact with to the everyday lives of Zimbabweans in Zimbabwe. A lot of things pass them by and they only catch a glimpse of what’s happening through the window of social media. However, these guys have been at the forefront of telling Zimbabwean stories in a comic twist, from all the way in the United Kingdom.
Popularly known as Munashe, Xavier, and Gearbox, these three comedians are certainly setting the pace in their content distribution. Their market of expatriates who yearn for a feel of home revel in these comic’s relatable comedy which mimics some of the small things they miss about home. Tackling tribal, Zimbabwean and gender stereotypes these three kings rule the roost on social media and must we say, their skits look crispy doe
Read more